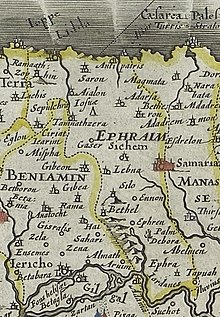 According to the Hebrew Bible, the Tribe of Ephraim (Hebrew: אֶפְרַיִם / אֶפְרָיִם, Efrayim) was one of the Tribes of Israel. The Tribe of Manasseh together with Ephraim formed the House of Joseph. It is one of the ten lost tribes. The etymology of the name is disputed.[1]

Ephraim as portrayed in biblical narrative[edit]

According to the Bible, the Tribe of Ephraim is descended from a man named Ephraim, who is recorded as the son of Joseph, the son of Jacob, and Asenath, the daughter of Potiphera.[2] [3] The descendants of Joseph formed two of the tribes of Israel, whereas the other sons of Jacob were the founders of one tribe each.

The Bible records that the Tribe of Ephraim entered the land of Canaan during its conquest by Joshua, a descendant of Ephraim himself.[4] However, many archeologists have abandoned the idea that Joshua carried out a conquest of Canaan similar to that described in the Book of Joshua, seeing Jews instead as indigenous Canaanites who developed a monotheistic religion over time.[5]

From Joshua to the formation of the first Kingdom of Israel, the Tribe of Ephraim was a part of a loose confederation of Israelite tribes. No central government existed, and in times of crisis the people were led by ad hoc leaders known as Judges (see the Book of Judges).

With the growth of the threat from Philistine incursions, the Israelite tribes decided to form a strong centralised monarchy to meet the challenge. The Tribe of Ephraim joined the new kingdom with Saul as the first king. The widely accepted date for Saul's reign is approximately 1025–1005 BCE. Some scholars dispute this date range and place Saul later, perhaps as late as "the second half of the tenth century B.C.E."[6]

After the death of Saul, the Bible records all the tribes other than Judah remained loyal to the House of Saul. After the death of Ishbosheth, Saul's son and successor to the throne of Israel, the Tribe of Ephraim joined the other northern Israelite tribes in making David, who was then the king of Judah, the king of a reunited Kingdom of Israel. According to archaeologist Israel Finkelstein, there is doubt about whether the biblical ordering for the reigns of the early monarchs is reliable, and that the sequence preserved in the Bible, in which David follows Saul as king of Israel, may not be historically accurate.[7]

However, on the accession of Rehoboam, David's grandson, in c. 930 BCE the northern tribes split from the House of David to form the northern Kingdom of Israel. The first king of the northern kingdom was an Ephraimite, Jeroboam, who likely ruled in 931–909 BCE.[8][9]

The accents of the tribes were distinctive enough even at the time of the confederacy so that when the Israelites of Gilead, under the leadership of Jephthah, fought the Tribe of Ephraim, their pronunciation of shibboleth as sibboleth was considered sufficient evidence to single out individuals from Ephraim, so that they could be subjected to immediate death by the Israelites of Gilead.

Ephraim was a member of the Northern Kingdom until the kingdom was conquered by Assyria in c. 723 BCE and the population deported. From that time, the Tribe of Ephraim has been counted as one of the Ten Lost Tribes of Israel.

In the biblical account, following the completion of the conquest of Canaan by the Israelite Joshua allocated the land among the twelve tribes. Kenneth Kitchen, a well-known conservative biblical scholar, dates this event to slightly after 1200 BC.[10] However, the consensus view of modern scholars is that the conquest of Joshua as described in the Book of Joshua never occurred.[11][12][13]

As recorded in the Book of Joshua, the territory allocated to the Tribe of Ephraim was at the center of Canaan, west of the Jordan, south of the territory of Manasseh, and north of the Tribe of Benjamin. The region later named Samaria (as distinguished from Judea or Galilee) consisted mostly of Ephraim's territory. The area was mountainous, giving it protection, and also highly fertile, giving prosperity,[14][15][16][17] 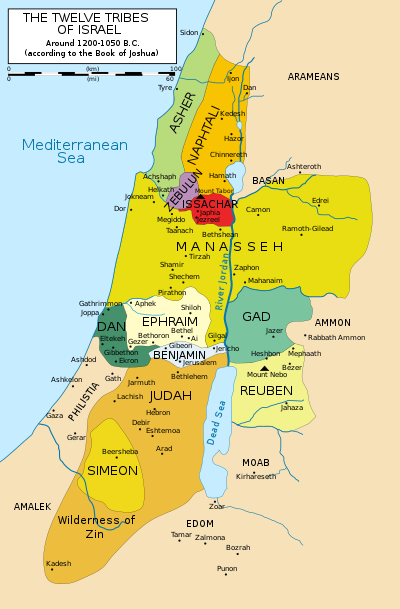 Map of the twelve tribes of Israel; Ephraim in the west is shaded a pale yellow

The territory of Ephraim contained the early centers of Israelite religion - Shechem and Shiloh.[18] These factors contributed to making Ephraim the most dominant of the tribes in the Kingdom of Israel, and led to Ephraim becoming a synonym for the entire kingdom.[18]

Bethel was allocated by Joshua to the Tribe of Benjamin (Joshua 18:11-28). However, even by the time of the prophetess Deborah, Bethel is described as being in the land of the Tribe of Ephraim (Judges 4:5). Some twenty years after the breakup of the United Monarchy, Abijah, the second king of Kingdom of Judah, defeated Jeroboam of Israel and took back the towns of Bethel, Jeshanah and Ephron, with their surrounding villages (Chronicles 13:17-19). Ephron is believed to be the Ophrah that was also allocated to the Tribe of Benjamin by Joshua (Joshua 18:20-28).

The riverine gulch, naḥal Ḳanah (Joshua 17:9), divided Ephraim's territory to the south, and Manasseh's territory to the north. The modern Israeli town of Karnei Shomron is built near this gulch, which runs in an easterly-westerly direction.[19]

The border of Ephraim extended from the Jordan River in the east to the Mediterranean Sea in the west, and incorporated within it the cities of Bethel (now Beitin[20]), ʻAtarot, Beth-Ḥoron the Nether (now Bayt ʻUr), extending as far as Gezer (now Abu Shûsheh, formerly known as Tell el Jezer) and the Mediterranean Sea.[21] Gezer was said to have been inhabited by Canaanites long after Joshua had either killed or expelled the other Canaanites.[22] According to French archaeologist, Charles Clermont-Ganneau, who identified the site in 1871 and later carried out excavations there, Gezer marked the extreme western point of the territory of Ephraim, and was "situated at the actual intersection of the boundaries of Ephraim, Dan and Judah."[23] This view, however, does not seem to be supported by the Scriptures themselves which place the extent of Ephraim's border at the sea.

Spanish-Jewish traveller Benjamin of Tudela wrote that the southern-most bounds of the territory of Ephraim extended in a south-westerly direction as far as the town of Ibelin or Jabney.[24]

According to the Torah, the tribe consisted of descendants of Ephraim a son of Joseph, from whom it took its name;[25] however some critical Biblical scholars view this also as postdiction, an eponymous metaphor providing an aetiology of the connectedness of the tribe to others in the Israelite confederation.[26] In the Biblical account, Joseph is one of the two children of Rachel and Jacob, a brother to Benjamin, and father to both Ephraim, and his first son, Manasseh; although Manasseh was the eldest, Jacob foresaw that Ephraim's descendants would be greater than his brother's.[27]

Though the biblical descriptions of the geographic boundary of the House of Joseph are fairly consistent, the descriptions of the boundaries between Manasseh and Ephraim are not, and each is portrayed as having exclaves within the territory of the other.[18] Furthermore, in the Blessing of Jacob, and elsewhere ascribed by textual scholars to a similar or earlier time period,[28] Ephraim and Manasseh are treated as a single tribe, with Joseph appearing in their place. From this it is regarded as obvious that originally Ephraim and Manasseh were considered one tribe — that of Joseph.[18] According to several biblical scholars, Benjamin was also originally part of the House of Joseph, but the biblical account of this became lost;[18][26] Benjamin being differentiated by being that part of Ephraim (House of Joseph) which joined the Kingdom of Judah rather than that of Israel.

A number of biblical scholars suspect that the Joseph tribes (including Benjamin) represent a second migration of Israelites to Israel, later than the main tribes,[26] specifically that it was only the Joseph tribes which went to Egypt and returned, while the main Israelite tribes simply emerged as a subculture from the Canaanites and had remained in Canaan throughout;[26] in the narrative in the Book of Joshua, which concerns the arrival in (and conquest of) Canaan by the Israelites from Egypt, the leader is Joshua, who was a member of the Ephraim tribe. According to this view, the story of Jacob's visit to Laban to obtain a wife began as a metaphor for the second migration, with Jacob's new family, possessions, and livestock, obtained from Laban, being representations of the new wave of migrants;[26]

In the account of the deuteronomic history, Ephraim is portrayed as domineering, haughty, discontented, and jealous, but in classical rabbinical literature, the biblical founder of the tribe is described as being modest and not selfish.[18] These rabbinical sources allege that it was on account of modesty and selflessness, and a prophetic vision of Joshua, that Jacob gave Ephraim precedence over Manasseh, the elder of the two;[18] in these sources, Jacob is regarded as sufficiently just that God upholds the blessing in his honour, and makes Ephraim the leading tribe.[18] Nevertheless, other classical rabbinical texts mock the tribe for the character it has in the deuteronomic history, claiming that Ephraim, being headstrong, left Egypt 30 years prior to the Exodus, and on arrival in Canaan was subjected to a disastrous battle with the Philistines;[18] in the Midrashic Jasher this is portrayed as a rebellion of Ephraim against God, resulting in the slaying of all but 10, and the bleached bones of the slaughtered being strewn across the roads, so much so that the circuitous route of the Exodus was simply an attempt by God to prevent the Israelites from having to suffer the sight of the remains.[18]

Though from the point of view of an increasing majority of archaeologists, there were always two distinct cultures in Canaan, a strong and prosperous northern kingdom and a weaker and poorer southern one,[29] in the Biblical account the Israelite tribes were initially united in a single kingdom, and only later fractured into the northern and southern kingdoms; this fracture is blamed by the Bible on the jealousy of Ephraim over the growing power of Judah. In the Book of Chronicles, Ephraim's act of splintering from Judah is denounced as forsaking God,[30] and Ephraim is portrayed as becoming highly irreligious, particularly in their resistance to the reforms enacted by Hezekiah and Josiah.[31]

It was not until the close of the first period of Jewish history that God 'refused the tabernacle of Joseph (Hebrew Bible), and chose not the tribe of Ephraim, but chose the tribe of Judah, the Mount Zion which he loved'. (Ps 78:67,68) When the Ark was removed from Shiloh to Zion the power of Ephraim was sequestered.[citation needed]

As part of the Kingdom of Israel, the territory of Ephraim was conquered by the Assyrians, and the tribe exiled; the manner of their exile led to their further history being lost. However, several modern day groups claim descent, with varying levels of academic and rabbinical support. The Samaritans claim that some of their adherents are descended from this tribe, and many Persian Jews claim to be descendants of Ephraim. Further afield, in India the Telugu Jews claim descent from Ephraim, and call themselves Bene Ephraim, relating similar traditions to those of the Mizo Jews, whom the modern state of Israel regards as descendants of Manasseh.[32]

The Church of Jesus Christ of Latter-day Saints believes a significant portion of its members to be descended from or adopted into the tribe of Ephraim, believing that they are charged with restoring the lost tribes in the latter days as prophesied by Isaiah, and that the tribes of both Ephraim and Judah will play important leadership roles for covenant Israel in the last days; some believe that this would be the fulfilment of part of the Blessing of Jacob, where it states that Joseph is a fruitful bough, even a fruitful bough by a well; whose branches run over the wall (Genesis 49:22, interpreting the "wall" as the ocean).[33]