From Wikipedia, the free encyclopedia
Jump to navigation Jump to search
Event in the Passion of the Christ 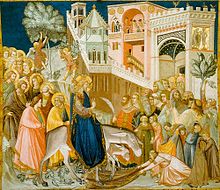 Jesus enters Jerusalem and the crowds welcome him,

In the accounts of the four canonical Gospels, Jesus's triumphal entry into Jerusalem takes place in the days before the Last Supper, marking the beginning of his Passion, his time of suffering, death, and resurrection celebrated during Holy Week. Christians celebrate Jesus's entry into Jerusalem on Palm Sunday, which begins a week of celebrations known as Holy Week ending with Easter Sunday.

In John 12:9–11 crowds gather around Jesus and believe in him after he raised Lazarus from the dead, and the next day the multitudes that had gathered for the feast in Jerusalem welcome Jesus as he enters the city.

According to the Gospels, Jesus was staying at Bethany before entering Jerusalem. John 12:1 states that he was in Bethany six days before the passover. In the synoptic gospels, Jesus sends two disciples ahead to the nearby village of Bethphage in order to retrieve a donkey and a colt and if questioned, to say that the donkey was needed by the Lord. Jesus then rode both the donkey and colt side by side [1]

Jesus then rode the donkey into Jerusalem, with the three synoptic gospels stating that the disciples had first put their cloaks on it (presumably to make it more comfortable). Matthew 21:7 maintains that the disciples laid their cloaks on both animals. Heinrich Meyer suggests that "they spread their outer garments upon both animals, being uncertain which of them Jesus intended to mount".[2] It is suggested that Jesus used both, one after another: the donkey representing the Jews under the burden of the law, and the colt, the untamed gentiles.[3]

In Luke 19:41 as Jesus approaches Jerusalem, he looks at the city and weeps over it , foretelling the suffering that awaits the city.[4]

The Gospels go on to recount how Jesus rode into Jerusalem, and how the people there laid down their cloaks in front of him and also laid down small branches of trees. The people sang part of Psalm 118: 25-26: Blessed is He who comes in the name of the Lord. We bless you from the house of the Lord ....

On his entry into the city, Matthew's account suggests that Jesus evoked great excitement - "all the city was moved". The people of the city asked "Who is this?" and "the multitudes" answered, "This is Jesus, the prophet from Nazareth of Galilee”.

Bethany was located east of Jerusalem on the Mount of Olives. Zechariah 14:4 states that the Messiah would come to Jerusalem from the Mount of Olives:[5][6] Matthew 21:1-11 refers to a passage from Book of Zechariah (9:9) and states: "All this was done, that it might be fulfilled which was spoken by the prophet, saying, Tell ye the daughter of Sion, Behold, thy King cometh unto thee, meek, and sitting upon an ass, and a colt the foal of an ass."[5] Though Jesus had been to Jerusalem several times to celebrate the feasts, his final entry into Jerusalem had a special meaning. He was solemnly entering as a humble King of peace.[3] Traditionally, entering the city on a donkey symbolizes arrival in peace, rather than as a war-waging king arriving on a horse.[7][8]

The Golden Gate is located in the north section of the east wall of the Temple Mount. In Jewish belief, the gate is called 'The Gate of Mercy' (sha'ar harakhamim), and is considered to be the place from which the Messiah will enter in the end of days. According to Jewish tradition, the Shekhinah (שכינה) (Divine Presence) used to appear through the eastern Gate, and will appear again when the Anointed One (Messiah) comes (Ezekiel 44:1–3)[9] The gate is believed[by whom?] to be the place from which Christ entered Jerusalem on Palm Sunday, thus implying his own messianic status.[10]

The New Testament says that Jesus traveled by way of Bethphage. Usually the paschal lamb was brought from Bethphage and led to the Temple mount.[3] 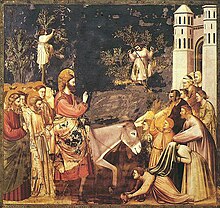 The triumphal entry and the palm branches, resemble the celebration of Jewish liberation in 1 Maccabees (13:51) which states: "And entered into it ... with thanksgiving, and branches of palm trees, and with harps, and cymbals, and with viols, and hymns, and songs."[11]