From Wikipedia, the free encyclopedia
Jump to navigation Jump to search
Christian holiday

Twelfth Night (also known as Epiphany Eve) is a festival in some branches of Christianity that takes place on the last night of the Twelve Days of Christmas, marking the coming of the Epiphany.[1] Different traditions mark the date of Twelfth Night on either 5 January or 6 January, depending on which day one considers to be the first of the Twelve Days: 25 or 26 December.

A superstition, in some English-speaking countries, is that it is unlucky to leave Christmas decorations hanging after Twelfth Night, a tradition also variously attached to the festivals of Candlemas (2 February), Good Friday, Shrove Tuesday and Septuagesima.[2] Other popular Twelfth Night customs include singing Christmas carols, chalking the door, having one's house blessed, merrymaking, as well as attending church services.[3][4] The main event for this holiday was to have a cake in the center of a table. Everyone would take a piece of this cake and two pieces had a dried pea and bean. Whoever had this in their slice would be royalty for one day no matter their position.[not verified in body]

In 567 the Council of Tours proclaimed that the entire period between Christmas and Epiphany should be considered part of the celebration, creating what became known as the twelve days of Christmas, or what the English called Christmastide. On the last of the twelve days, called Twelfth Night, various cultures developed a wide range of additional special festivities. The variation extends even to the issue of how to count the days. If Christmas Day is the first of the twelve days, then Twelfth Night would be on January 5, the eve of Epiphany. If December 26, the day after Christmas, is the first day, then Twelfth Night falls on January 6, the evening of Epiphany itself.[8]

The Church of England, Mother Church of the Anglican Communion, celebrates Twelfth Night on the 5th and "refers to the night before Epiphany, the day when the nativity story tells us that the wise men visited the infant Jesus".[9][10][11]

Wassailing apple trees on the twelfth night to ensure a good harvest, a tradition in Maplehurst, West Sussex 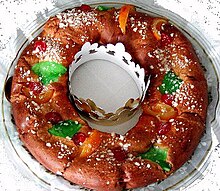 A Spanish Roscón de reyes, or Kings' ring. This size, approx. 50 cm (20 in) diameter, usually serves 8 people. This pastry is just one of the many types baked around the world for celebrations during the Twelve Days of Christmas and Twelfth Night.

In 567, the Council of Tours "proclaimed the twelve days from Christmas to Epiphany as a sacred and festive season, and established the duty of Advent fasting in preparation for the feast."[12][13][14][15][16] Christopher Hill, as well as William J. Federer, states that this was done in order to solve the "administrative problem for the Roman Empire as it tried to coordinate the solar Julian calendar with the lunar calendars of its provinces in the east."[17][18][19]

In medieval and Tudor England, Candlemas traditionally marked the end of the Christmas season,[20] although later, Twelfth Night came to signal the end of Christmastide, with a new but related season of Epiphanytide running until Candlemas.[21] A popular Twelfth Night tradition was to have a bean and pea hidden inside a Twelfth-night cake; the "man who finds the bean in his slice of cake becomes King for the night while the lady who finds a pea in her slice of cake becomes Queen for the night."[22] Following this selection, Twelfth Night parties would continue and would include the singing of Christmas carols, as well as feasting.[22]

Food and drink are the centre of the celebrations in modern times, and all of the most traditional ones go back many centuries. The punch called wassail is consumed especially on Twelfth Night and throughout Christmas time, especially in the UK, and door-to-door wassailing (similar to singing Christmas carols) was common up until the 1950s.[23] Around the world, special pastries, such as the tortell and king cake, are baked on Twelfth Night, and eaten the following day for the Feast of the Epiphany celebrations. In English and French custom, the Twelfth-cake was baked to contain a bean and a pea, so that those who received the slices containing them should be respectively designated king and queen of the night's festivities.[24]

In parts of Kent, there is a tradition that an edible decoration would be the last part of Christmas to be removed in the Twelfth Night and shared amongst the family.[25]

The Theatre Royal, Drury Lane in London has had a tradition since 1795 of providing a Twelfth Night cake. The will of Robert Baddeley made a bequest of £100 to provide cake and punch every year for the company in residence at the theatre on 6 January. The tradition still continues.[26]

In Ireland, it is still the tradition to place the statues of the Three Kings in the crib on Twelfth Night or, at the latest, the following Day, Little Christmas.

In colonial America, a Christmas wreath was always left up on the front door of each home, and when taken down at the end of the Twelve Days of Christmas, any edible portions would be consumed with the other foods of the feast. The same held true in the 19th–20th centuries with fruits adorning Christmas trees. Fresh fruits were hard to come by, and were therefore considered fine and proper gifts and decorations for the tree, wreaths, and home. Again, the tree would be taken down on Twelfth Night, and such fruits, along with nuts and other local produce used, would then be consumed.[citation needed]

Modern American Carnival traditions shine most brightly in New Orleans. In the mid-twentieth century friends gathered for weekly king cake parties. Whoever got the slice with the "king", usually in the form of a miniature baby doll (symbolic of the Christ Child, "Christ the King"), hosted the next week's party. Traditionally, this was a bean for the king and a pea for the queen.[27] Parties centered around king cakes are no longer common and king cake today is usually brought to the work place or served at parties, the recipient of the plastic baby being obligated to bring the next king cake to the next function. In some countries, the Twelfth Night and Epiphany mark the start of the Carnival season, which lasts through Mardi Gras Day.

In Spain, Twelfth Night is called Cabalgata de Reyes ("Parade of Kings"), and historically the "kings" would go through towns and hand out sweets.[23]

In France, Gateau des Rois ("Kings' Cakes") are eaten all month long. The cakes vary depending on the region; in northern France, it is called a galette and is filled with frangipane, fruit, or chocolate. In the south, it is more of a brioche with candied fruit.[23]

Twelfth Night in the Netherlands became so secularized, rowdy and boisterous that public celebrations were banned from the church.[28]

In some places, particularly southwest England, Old Twelfth Night is still celebrated on 17 January.[29][30] This continues the custom of the Apple Wassail on the date that corresponded to 6 January on the Julian calendar at the time of the change in calendars enacted by the Calendar Act of 1750.[31] 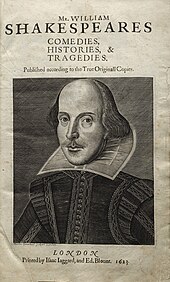 Shakespeare's play Twelfth Night, or What You Will was written to be performed as a Twelfth Night entertainment. The earliest known performance took place at Middle Temple Hall, one of the Inns of Court, on Candlemas night, 2 February 1602.[32] The play has many elements that are reversed, in the tradition of Twelfth Night, such as a woman Viola dressing as a man, and a servant Malvolio imagining that he can become a nobleman.

Ben Jonson's The Masque of Blackness was performed on 6 January 1605 at the Banqueting House in Whitehall. It was originally entitled The Twelvth Nights Revells. The accompanying Masque, The Masque of Beauty was performed in the same court the Sunday night after the Twelfth Night in 1608.[33]

Robert Herrick's poem Twelfe-Night, or King and Queene, published in 1648, describes the election of king and queen by bean and pea in a plum cake, and the homage done to them by the draining of wassail bowls of "lamb's-wool", a drink of sugar, nutmeg, ginger and ale.[34]

In Chapter 6 of Harrison Ainsworth's 1858 novel Mervyn Clitheroe, the eponymous hero is elected King of festivities at the Twelfth Night celebrations held in Tom Shakeshaft's barn, by receiving the slice of plum cake containing the bean; his companion Cissy obtains the pea and becomes queen, and they are seated together in a high corner to view the proceedings. The distribution has been rigged to prevent another person gaining the role. The festivities include country dances, and the introduction of a "Fool Plough", a plough decked with ribands brought into the barn by a dozen mummers together with a grotesque "Old Bessie" (played by a man) and a Fool dressed in animal skins with a fool's hat. The mummers carry wooden swords and perform revelries. The scene in the novel is illustrated by Hablot Knight Browne ("Phiz"). In the course of the evening, the fool's antics cause a fight to break out, but Mervyn restores order. Three bowls of gin punch are disposed of, and at eleven o'clock the young men make the necessary arrangements to see the young ladies safely home across the fields.[35]