From Wikipedia, the free encyclopedia
Jump to navigation Jump to search
This article is about the Hebrew for "righteous one". For the Hebrew letter "Tzadik", see Tsade. For other uses, see Tzadik (disambiguation). 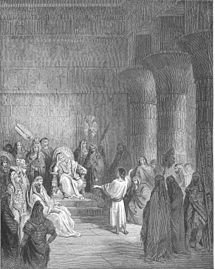 Joseph interprets Pharaoh's Dream (Genesis 41:15–41). Of the Biblical figures in Judaism, Joseph is customarily called the Tzadik. Where the Patriarchs lived supernally as shepherds, the quality of righteousness contrasts most in Joseph's holiness amidst foreign worldliness. In Kabbalah, Joseph embodies the sefirah of Yesod, the lower descending connection of spirituality to materiality, the social role of the tzadik in Hasidic Judaism.

Tzadik (Hebrew: צַדִּיק [tsaˈdik], "righteous [one]", also zadik, ṣaddîq or sadiq; pl. tzadikim [tsadiˈkim] צדיקים ṣadiqim) is a title in Judaism given to people considered righteous, such as Biblical figures and later spiritual masters. The root of the word ṣadiq, is ṣ-d-q (צדק tsedek), which means "justice" or "righteousness". When applied to a righteous woman, the term is inflected as tzadeikes/tzaddeket.

Tzadik is also the root of the word tzedakah ('charity', literally 'righteousness'). The term tzadik "righteous", and its associated meanings, developed in Rabbinic thought from its Talmudic contrast with hasid ("pious" honorific), to its exploration in ethical literature, and its esoteric spiritualisation in Kabbalah.

Since the late 17th century, in Hasidic Judaism, the institution of the mystical tzadik as a divine channel assumed central importance, combining popularization of (hands-on) Jewish mysticism with social movement for the first time.[1] Adapting former Kabbalistic theosophical terminology, Hasidic philosophy internalised mystical experience, emphasising devekut attachment to its Rebbe leadership, who embody and channel the Divine flow of blessing to the world.[2]

Ṣedeq in ancient Canaanite religion may have been an epithet of a god of the Jebusites.[3] The Hebrew word appears in the biblical names Melchizedek, Adonizedek, and Zadok, the high priest of David.

The nature of the Tzadik[edit]

In classic Jewish thought, there are various definitions of a tzadik. According to Maimonides (based on Tractate Yevamot of the Babylonian Talmud 49b-50a): "One whose merit surpasses his iniquity is a tzadik".[4]

According to the Hasidic Tanya (based on passages in the Tanakh and the Talmud, and the tradition in Kabbalah), the true title of tzadik denotes a spiritual description of the soul. Its true meaning can only be applied to one who has completely sublimated their natural "animal" or "vital" soul inclinations into holiness, so that they experience only love and awe of God, without material temptations. Hence, a tzadik serves as a "vehicle" or "merkavah" [מרכבה][5] to God and has no ego or self-consciousness. Note that a person cannot attain such a level, rather it is granted from on High (or born with, etc.).[6] This select level elevates the "Intermediate" person (beinoni) into one who never sins in thought, speech or action. Unlike the Tzadik, they only experience divine devekut (communion) during devoted moments of worship or study, while in mundane life they can be tempted by natural inclinations, but always choose to stay connected to holiness. In the Tanya[7] the difference between the former Talmudic-Maimonidean and latter Kabbalistic-Hasidic conceptions is raised. Since the "Torah has 70 facets" of interpretation, perhaps both conceptions are metaphysically true:

As for what is written in the Zohar III, p.231: He whose sins are few is classed as a "righteous man who suffers", this is the query of Rav Hamnuna to Elijah. But according to Elijah's answer, ibid., the explanation of a "righteous man who suffers" is as stated in Raaya Mehemna on Mishpatim, which is given above. (Distinguishing 2 levels of Tzadik: The "righteous who prospers"-literally "good to him" is interpreted to mean that the natural soul in him has become "his own-transformed to good". The "righteous who suffers"-literally "bad to him" is interpreted to mean that his natural soul still exists in his unconscious, but is nullified to his Divine soul, "the bad-is under him") And the Torah has seventy facets. (So the reason for the question)

The Talmud[8] says that at least 36 Tzadikim Nistarim (anonymous tzadikim) are living among us in all times; they are anonymous, and it is for their sake alone that the world is not destroyed.[9] The Talmud and the Kabbalah offer various ideas about the nature and role of these 36 tzadikim. In Jewish folklore they are called "lamedvovniks", from the gematria numerical value for 36. In Hasidism, with its social institution of the Tzadik in the central role of the community, the 36 may not necessarily be unknown, therefore. However, a Hasidic aphorism describes a known Rebbe Tzadik as being among the 36, as their true greatness could be concealed beyond the perception of their devoted followers.

Hasidim adhere to the belief that there is a person born each generation with the potential to become Messiah, if the Jewish people warrant his coming. This candidate is known as the Tzadik Ha-Dor, meaning Tzaddik of the Generation.

While the tzadik status, according to its above definitions, is not necessarily related to the ability to perform or call upon miracles, the term tzadik is often used loosely by the Talmud to indicate those who have achieved especially outstanding piety and holiness. In this context, the tzadik's prayers are considered especially potent, as the Talmud states: "A tzadik decrees and the Holy One (blessed be He) fulfills." This is line with the Talmudic dictum: Rabban Gamliel the son of Rabbi Judah haNasi used to say: "Make His Will your own will, that He make your will as His Will."[10]

In some contexts, people refer specifically to the pious miracle worker as a tzadik. According to the Baal Shem Tov, it is said, this ability is attainable for every Jew. It is told that he stated that every Jew has the power to cross a river atop a handkerchief, through connecting with their soul (which is divine in essence).[citation needed] In Hasidism, the doctrine of "Practical Tzadikism", developed by Elimelech of Lizhensk, involved the Tzadik performing miracles to channel the Ayin-Yesh Divine blessing. In its most extreme version, Hasidic "wonder-workers", predominant in 19th century Poland, emphasised this conception, sometimes criticised by other Hasidic leaders as superficial. To Menachem Mendel of Kotzk, and his reaction against Popular Tzadikism, the greatest miracle was to examine oneself without self-delusion.

Historical sources on the Tzadik[edit]

Based on the teachings of Isaac Luria, the Baal Shem Tov and the Chaim ibn Attar, Shneur Zalman of Liadi taught in the name of the Zohar that "He who breathed life into man, breathed from Himself." Therefore, one's soul comes from the essence of God.

Terminology of the Tzadik in Kabbalah[edit]

"The Tzadik is the foundation (Yesod) of the World"[22]

In the system of 10 Sephirot Divine emanations in Kabbalah, each of the 7 emotional expressions is related to an archetypal figure in the Hebrew Bible. The first emanated realm to emerge from God's potential Will in Creation is Atziluth, the World of "Emanation". As it is still nullified to Divinity, so not yet considered a self-aware existence, it is the realm where the 10 Sephirot attributes of God are revealed in their essence. In lower spiritual worlds the sephirot also shine, but only in successively lower degrees, concealed through successive contractions and veilings of the Divine vitality. Seven Biblical tzadikim, righteous figures are considered as embodiments of the emotional sephirot of Atzilut: Abraham-Kindness, Isaac-Restraint, Jacob-Mercy, Moses-Endurance, Aaron-Glory, Joseph-Foundation, David-Kingship. While all seven figures are considered supreme Tzadikim, in particular contexts, either Joseph as Yesod, and Moses as inclusive soul of the community, are identified especially as archetypes for the Tzadik in general.

In the sephirot, Chesed-Abraham, Gevurah-Isaac and Tiferet-Jacob are higher spiritual powers than Yesod-Joseph, which channels the higher powers to their fulfilment in Malchut action. However, traditionally in Judaism, Joseph is referred to with the quality of "Tzadik-Righteous". While the Patriarchs lived righteously as shepherds, Joseph remained holy in Egypt, surrounded by impurity, tested by Potiphar's wife, captive in prison, and then active as viceroy to Pharaoh. As the Heavenly sephirah of Yesod-"Foundation" channels spirituality to our physical realm, so in Kabbalah and the further development in Hasidic thought, its function also parallels the human role of the Tzadik in this world:

Intellect in the supernal soul of the community[edit]

"..To love the Lord your God, to listen to His voice, and to cleave to Him.."[24]
"Cleaving to a Torah scholar is as cleaving to the Divine Shechinah"[25]

...the Rebbe (Nachman of Breslov) must have intended that we go there for Rosh HaShanah, continually, until the arrival of the Mashiach. The Rebbe himself said that the Evil had glorified many false leaders, making it extremely difficult to find where Moses is - the true Tzaddik. You should know, my friend, that this is the reason we have come here: to join our precious heritage with a bond that will last every day of our lives

Rebbe Nachman of Breslov explained how only a true leader can awaken the most genuine Jewish faith: this leader is the Tzadik.

The doctrine of the Tzadik in Hasidism[edit] 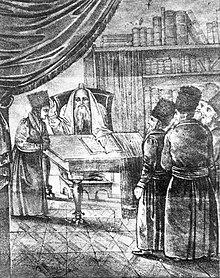 The Hasidic development of the Tzadik combined the former roles of private mystic and social Maggid into communal mystical-leadership. Hasidic thought internalised the Ayin-Yesh Heavenly duality of Kabbalah into a complete paradigm for Deveikut perception of Divine Omnipresence. The Hasidic Tzadik embodied this as a channel for the Divine flow.[citation needed]
See also: Ayin and Yesh