From Wikipedia, the free encyclopedia
Jump to navigation Jump to search
Greek mythological figure
For other uses, see Urania (disambiguation). 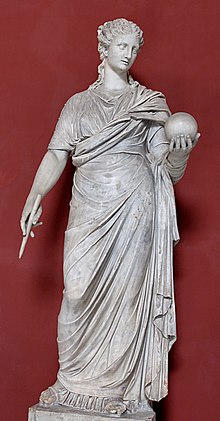 Urania, a restored Roman copy after a Greek original of the 4th century BC, Hadrian's Villa.

Urania (Uranya as a variant form) (/jʊəˈreɪniə/; Ancient Greek: Οὐρανία, Ourania; short name Ράνια, Rania, Ranya; meaning "heavenly" or "of heaven") was, in Greek mythology, the muse of astronomy, and in later times, of Christian poetry.

Urania was the daughter of Zeus by Mnemosyne and also a great granddaughter of Uranus.[1][2] Some accounts list her as the mother of the musician Linus[3] by Apollo[4] or Amphimarus,[5] son of Poseidon, and Hymenaeus also is said to have been a son of Urania.[6]

Urania is often associated with Universal Love and the Holy Spirit. Sometimes identified as the eldest of the divine sisters, Urania inherited Zeus' majesty and power and the beauty and grace of her mother Mnemosyne.

Urania dresses in a cloak embroidered with stars and keeps her eyes and attention focused on the Heavens. She is usually represented with a celestial globe to which she points with a little staff.[7] She is able to foretell the future by the arrangement of the stars.[8]

Those who are most concerned with philosophy and the heavens are dearest to her. Those who have been instructed by her she raises aloft to heaven, for it is a fact that imagination and the power of thought lift men's souls to heavenly heights.[9]

Urania, o'er her star-bespangled lyre,
With touch of majesty diffused her soul;
A thousand tones, that in the breast inspire,
Exalted feelings, o er the wires'gan roll—
How at the call of Jove the mist unfurled,
And o'er the swelling vault—the glowing sky,
The new-born stars hung out their lamps on high,
And rolled their mighty orbs to music's sweetest sound.

—From An Ode To Music by James G. Percival

During the Renaissance, Urania began to be considered the Muse for Christian poets. In the invocation to Book 7 of John Milton's epic poem Paradise Lost, the poet invokes Urania to aid his narration of the creation of the cosmos, though he cautions that it is "[t]he meaning, not the name I call" (7.5) 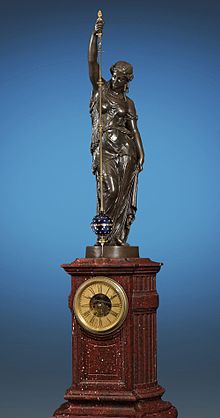 Urania in Astronomy and Navigation[edit]

This article incorporates text from a publication now in the public domain: Smith, William, ed. (1870). "Urania 1." . Dictionary of Greek and Roman Biography and Mythology.