Uther Pendragon (/ˈjuːθər pɛnˈdræɡən, ˈuːθər/;[1] Welsh: Uthyr Pendragon, Uthyr Bendragon), also known as King Uther, is a legendary king of sub-Roman Britain and the father of King Arthur. A few minor references to Uther appear in Old Welsh poems, but his biography was first written down by Geoffrey of Monmouth in his Historia Regum Britanniae (History of the Kings of Britain), and Geoffrey's account of the character was used in most later versions. He is a fairly ambiguous individual throughout the literature, but is described as a strong king and a defender of the people.

According to Arthurian legend, Merlin magically disguises Uther to look like his enemy Gorlois, enabling Uther to sleep with Gorlois' wife Lady Igraine. Thus Arthur, "the once and future king", is an illegitimate child (though later legend, as found in Malory, emphasises that the conception occurred after Gorlois's death and that he was legitimated by Uther's subsequent marriage to Igraine[2]). This act of conception occurs the very night that Uther's troops dispatch Gorlois. The theme of illegitimate conception is repeated in Arthur's siring of Mordred by his own half-sister Morgause in the 13th century ad French prose cycles, which was invented by them; it is Mordred who mortally wounds King Arthur in the Battle of Camlann.

Uther's epithet Pendragon (composed of Welsh pen, "head, chief, top" and dragon, "dragon; warrior"; borrowed from the Latin word dracō, plural dracōnēs, "dragon[s]") literally means "Chief-Dragon" or "Head-Dragon", but in a figurative sense, "chief leader", "chief of warriors", "commander-in-chief", "generalissimo", or "chief governor".[3][4] The name was misinterpreted by Geoffrey of Monmouth in Historia Regum Britanniae to mean "dragon's head".[4] According to Geoffrey and works based on his version, Uther acquired the epithet when he witnessed a portentous dragon-shaped comet, which inspired him to use dragons on his standards. According to Robert de Boron[5] and the cycles based on his work, it was Uther's older brother (elsewhere called Aurelius Ambrosius) who saw the comet and received the name "Pendragon", Uther taking his epithet after his death.

Though the Welsh tradition of the Arthurian legend is fragmentary, some material exists through the Welsh Triads and various poems. Uther appears in these fragments, where he is associated with Arthur and, in some cases, even appears as his father.

He is mentioned in the circa-10th-century Arthurian poem "Pa gur yv y porthaur?" ("What man is the gatekeeper?"), where it is only said of him that Mabon son of Modron is his servant. He is also memorialised with "The Death-song of Uther Pen" from the Book of Taliesin.[6] The latter includes a reference to Arthur, so the marginal addition of "dragon" to Uther's name is probably justified. "The Colloquy of Arthur and the Eagle," a modern manuscript from the 16th century but believed to have originated from the 13th century, mentions another son of Uther named Madoc, the father of Arthur's nephew Eliwlod.[4]

In Triad 28, Uthyr is named the creator of one of the Three Great Enchantments of the Island of Britain, which he taught to the wizard Menw.[7] Since Menw is a shapeshifter according to Culhwch and Olwen, it might be that Uther was one as well. If this is so, it opens up the possibility that Geoffrey of Monmouth's narrative about Uther impregnating Igerna with Merlin's help (see below) was taken from a Welsh legend where Uthyr changed his own shape, Merlin possibly being added to the story by Geoffrey.[8]

Uthyr's other reference, Triad 51, however, shows influence from Geoffrey's Historia. It follows Geoffrey's description of Uther as son of Constantine III, now called "Custennin the Blessed", and brother of both Aurelius Ambrosius ("Emrys Wledig") and Constans II ("Custennin the Younger").[9]

Uther is best known from Geoffrey's Historia Regum Britanniae (1136) where he is the youngest son of King of Britannia, Constantine III. His eldest brother Constans succeeds to the throne on their father's death, but is murdered at the instigation of his adviser Vortigern, who seizes the throne. Uther and his other brother, Aurelius Ambrosius, still children, flee to Brittany. Vortigern makes an alliance with the Saxons under Hengist, but it goes disastrously wrong. Aurelius and Uther return, now adults. Aurelius burns Vortigern in his castle and becomes king.

With Aurelius on the throne, Uther leads his brother in arms to Ireland to help Merlin bring the stones of Stonehenge from there to Britain. Later, while Aurelius is ill, Uther leads his army against Vortigern's son Paschent and his Saxon allies. On the way to the battle, he sees a comet in the shape of a dragon, which Merlin interprets as presaging Aurelius's death and Uther's glorious future. Uther wins the battle and takes the epithet "Pendragon", and returns to find that Aurelius has been poisoned by an assassin. He becomes king and orders the construction of two gold dragons, one of which he uses as his standard.

He secures Britain's frontiers and quells Saxon uprisings with the aids of his retainers, one of whom is Gorlois, Duke of Cornwall. At a banquet celebrating their victories, Uther becomes obsessively enamoured of Gorlois' wife Igerna (Igraine), and a war ensues between Uther and his vassal. Gorlois sends Igerna to the impregnable castle of Tintagel for protection while he himself is besieged by Uther in another town. Uther consults with Merlin who uses his magic to transform the king into the likeness of Gorlois and thus gain access to Igerna at Tintagel. He spends the night with her and they conceive Arthur, but the next morning it is discovered that Gorlois had been killed. Uther marries Igerna and they have a daughter called Anna (in later romances she is called Morgause and is usually Igerna's daughter by her previous marriage). Morgause later marries King Lot and becomes the mother of Gawain and Mordred.

Uther later falls ill and the wars begin to go badly against the Saxons. He insists on leading his army himself, propped up on his horse. He defeats Hengist's son Octa at Verulamium (St Albans), despite the Saxons calling him the "Half-Dead King". However, the Saxons soon contrive his death by poisoning a spring which he drinks from near Verulamium.[10]

In Robert de Boron's Merlin Uther Pendragon kills Hengist after an assassination attempt by the Saxon leader and Merlin creates the Round Table for him. In the Prose Lancelot Uther Pendragon claims to have been born in Bourges. He takes an army to Brittany to fight against King Claudas of Bourges, a situation resembling that of the historical ruler Riothamus who went to Brittany to fight ravagers based in Bourges.

There is an alternative account of Uther Pendragon's background in Wolfram von Eschenbach's Parzival. A certain Mazadân went with a fairy named Terdelaschoye to the land of Feimurgân. (This looks like a garbling of some source that told of Mazadân's alliance with the Fay Morgan in Terre de la Joye; the "Land of Joy".) Mazadân becomes father of two sons, Lazaliez and Brickus. Brickus becomes father of Utepandragûn, father of Arthur, while the elder son, Lazaliez, becomes father of Gandin of Anjou, father of Gahmuret, father of Parzival (Percival). Uther Pendragon and Arthur here appear as the scions of the junior branch of an unattested House of Anjou. In some early German literature, believed to have relied on some now lost Celtic material, Uther was sometimes said to have been descended from fairies. It may have been meant to explain Arthur’s connection with Avalon. Since according to Geoffrey of Monmouth, Caliburn was a gift from Avalon, and Arthur was taken to Avalon to be healed. Layamon also said that, Arthur was given various blessings by fairies in his Brut.

Uther also appears in the chivalric romance Sir Cleges as the king to whom Sir Cleges brings the Christmas cherries, obtained by miracle.[11] 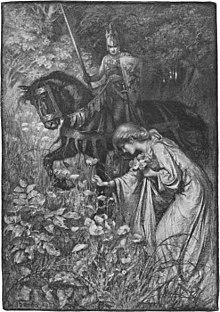 Uther, on horseback and disguised as Pelleas, watches Igraine picking flowers in Uther and Igraine by Warwick Deeping, illustrated by Wladyslaw T. Benda