From Wikipedia, the free encyclopedia
Jump to navigation Jump to search
Geographical place mentioned in the Bible
For the archaeological site, see Khirbet Qeiyafa.

Valley of Elah viewed from the top of Tel Azeka

The Valley of Elah or Ella Valley ("the valley of the terebinth";[1] Hebrew: עמק האלה Emek HaElah; Arabic: وادي السنط‎, Wadi es-Sunt) is a long, shallow valley in Israel and the West Bank best known as the place described in the Old Testament where the Israelites were encamped when David fought Goliath (1 Samuel 17:2, 19). It is home to several important archaeological sites, including those identified as the ancient towns of Azekah and Socho (17:1). Rising up from the valley on its extreme southeast end lies the hilltop ruin Adullam, and on its north lie the ruins of the ancient fortress city of Khirbet Qeiyafa.

The valley is named after the large and shady terebinth trees (Pistacia atlantica) which are indigenous to it. On the west side of the valley, near Socho, there is a very large and ancient tree of this kind, 55 feet (17 m) in height with a trunk 17 feet (5.2 m) in circumference and a canopy at least 75 feet (23 m) in diameter. This tree is notable for being one of the largest terebinths in the area, and marks the upper end of the valley.

Since the early 1970s, the valley has also contained a large satellite relay station, with an antenna farm containing some 120 satellite dishes of various sizes. From 2010 to 2014, the region around the valley was believed to be threatened by shale oil extraction through the CCR ground-heating process, with the Green Zionist Alliance and the grassroots group Save Adullam, among others, working to stop exploitation of the region.[2][3][4] The plan was ultimately blocked in 2014 by a zoning committee decision. In July 2019, the Elah Valley came under the Israel Nature and Parks Authority, owing largely to its historical importance and the desire to curtail the encroaching city limits of Beit Shemesh to its north.[5] 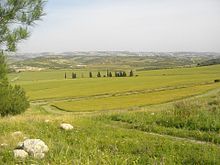 Extension of Elah Valley on its southeastern side, Wadi es Sur

The Valley of Elah has gained new importance as a possible point of support for the argument that Israel was more than merely a tribal chiefdom in the time of King David. At Khirbet Qeiyafa, southwest of Jerusalem in the Elah Valley, Professor Yosef Garfinkel has discovered a fortified city from the Iron Age IIa dated sometime between 1050 and 915 BC. The fortifications have been said to support the biblical account of the United Monarchy at the beginning of Iron Age II.[6] Others are skeptical and suggest it might represent either a Judahite or Canaanite fortress.[7]

The Valley of Elah after the winter rains, Wadi es Sur 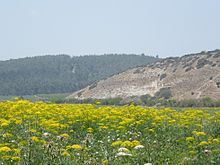 In the late 19th century, Claude Conder and Herbert Kitchener described the Elah Valley as being "one of the most fertile districts in Palestine. It is an open flat vale about half a mile across, and covered with corn; a narrow trench runs down the center full of white pebbles worn by the water in winter. Here and there large terebinths grow along its course (Butmet Wâdy es Sûr), and solitary oak trees (Ballûtet Kŭssis). On either side rise the stony hills covered with brushwood and wild growth."[8] 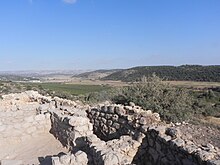 Numerous plant species are native to the Elah Valley, including: 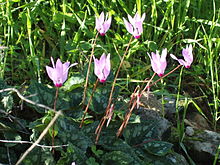 Blue lupine in Tel Socho of the Elah Valley

Animal species native to the Elah Valley include: