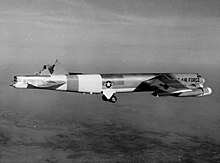 A Boeing B-52 with its vertical stabilizer ripped off. Despite the catastrophic failure of the stabilizer, the plane managed to land safely.

A vertical stabilizer, vertical stabiliser, or fin of an aircraft, missile, bomb, or car are typically found on the aft end of the fuselage or body, and are intended to reduce aerodynamic side slip and provide direction stability. It is analogous to a skeg on boats and ships.

Often navigational radio or airband transceiver antennas are placed on or inside the vertical tail. In all known trijets (jet aircraft with three engines), the vertical stabilizer houses the central engine or engine inlet duct.

A few aircraft models have a ventral fin under the rear end. Normally this is small, or can fold sideways, to allow landing. Both the North American X-15 supersonic/hypersonic experimental aircraft, and the late World War II German twin-engined Dornier Do 335 heavy fighter used differing forms of the cruciform tail stabilizing surface format.

Vertical stabilizers have also been used in automobiles, specifically in top-level motor sports, with the concept making a resurgence in both Formula 1 and Le Mans Prototype racing.

The conventional tail of an Airbus A380, with the vertical stabilizer exactly vertical

A T-tail has the horizontal stabilizer mounted at the top of the vertical stabilizer. It is commonly seen on rear-engine aircraft, such as the Bombardier CRJ200, the Fokker 70, the Boeing 727, the Vickers VC10 and Douglas DC-9, and most high-performance gliders.

T-tails are often incorporated on configurations with fuselage mounted engines to keep the horizontal stabilizer away from the engine exhaust plume.

T-tails present structural challenges since loads on the horizontal stabilizer must be transmitted through the vertical tail.

The cruciform tail is arranged like a cross, the most common configuration having the horizontal stabilizer intersecting the vertical tail somewhere near the middle. The PBY Catalina uses this configuration. The "push-pull" twin engined Dornier Do 335 World War II German fighter used a cruciform tail consisting of four separate surfaces, arranged in dorsal, ventral, and both horizontal locations, to form its cruciform tail, just forward of the rear propeller.

The Dassault Falcon is known for its cruciform tail. 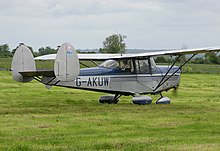 The twin tail of a Chrislea Super Ace, built in 1948

Rather than a single vertical stabilizer, a twin tail aircraft has two. These are vertically arranged, and intersect or are mounted to the ends of the horizontal stabilizer. The Beechcraft Model 18 and many modern military aircraft such as the American F-14, F-15, and F/A-18 use this configuration. The F/A-18, F-22 Raptor, and F-35 Lightning II have tailfins that are canted outward, to the point that they have some authority as horizontal control surfaces; both aircraft are designed to deflect their rudders inward during takeoff to increase pitching moment. A twin tail may be either H-tail, twin fin/rudder construction attached to a single fuselage such as North American B-25 Mitchell or Avro Lancaster, or twin boom tail, the rear airframe consisting of two separate fuselages each sporting one single fin/rudder, such as Lockheed P-38 Lightning or C-119 Boxcar. 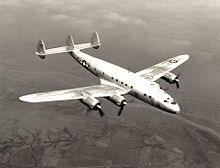 A Lockheed Constellation with a triple tail

A V-tail has no distinct vertical or horizontal stabilizers. Rather, they are merged into control surfaces known as ruddervators which control both pitch and yaw. The arrangement looks like the letter V, and is also known as a butterfly tail. The Beechcraft Bonanza Model 35 uses this configuration, as does the Lockheed F-117 Nighthawk, Northrop YF-23, and many of Richard Schreder's HP series of homebuilt gliders.

Winglets served double duty on Burt Rutan's canard pusher configuration VariEze and Long-EZ, acting as both a wingtip device and a vertical stabilizer. Several other derivatives of these and other similar aircraft use this design element.

The vertical stabilizer often employs a small fillet or "dorsal fin" at its forward base which helps to increase the stall angle of the vertical surface (thanks to vortex lift) and to prevent a phenomenon called rudder lock or rudder reversal. Rudder lock occurs when the force on a deflected rudder (in a steady sideslip) suddenly reverses as the vertical stabilizer stalls. This may leave the rudder stuck at full deflection with the pilot unable to recenter it.[2]

While vertical stabilizers have also been used in some race cars, such as the 1955 Jaguar D-type, the concept has seen sparing use until recently. It has seen a resurgence in Formula 1 and Le Mans endurance racing, where it is sometimes referred to as a "shark fin". Its primary purpose is to reduce sudden high-speed yaw-induced blow-overs that would cause cars to flip due to lift when subject to extreme yaw angles during cornering or in a spin. Since 2011, the vertical stabilizer has become mandatory for all newly homologated Le Mans Prototypes.[4]

Some Formula 1 teams utilized a vertical stabilizer as a way to disrupt the airflow to the rear wing reducing drag, the most radical system being the "F-duct" found in the McLaren MP4-25 (and later copied by Ferrari in the Ferrari F10). On demand by the driver, this system diverted air from a duct in the front of the car through a tunnel in the vertical fin onto the rear wing to stall it and reduce drag on the straights on which downforce wasn't needed. The system was banned for the 2011 Formula 1 season, with vertical stabilizers altogether being replaced with vestigial strakes for the 2018 season.[5]