From Wikipedia, the free encyclopedia
Jump to navigation Jump to search
For other uses, see Walls of Jericho. 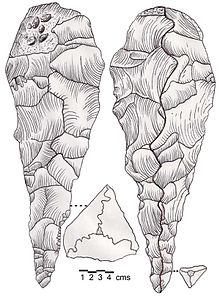 Trihedral Neolithic stone maul from Joub Jannine II, Lebanon. The type of tool suggested by Kathleen Kenyon to have been used to dig the 8 × 3 × 600 m ditch out of solid rock at ca. 9000 to 8000 BC.

The Wall of Jericho was a Pre-Pottery Neolithic A (PPNA) defensive or flood protection wall suggested to date to approximately 8000 BC.[1] If interpreted as an "urban fortification", the Wall of Jericho is the oldest city wall discovered by archaeologists anywhere in the world.[2] It is built of undressed stones and is located at the archaeological mound known as Tell es-Sultan, in the city of Jericho on the West Bank.

The topic of this article is the unique Neolithic-age stone wall, the earliest one of its kind. Other walls, such as contemporary house walls, or later, Bronze and Iron Age city walls, are only mentioned for the sake of context.

Excavation of city walls on the tell[edit]

One wall[dubious – discuss] was excavated by Charles Warren in 1868 at the request of the Palestine Exploration Fund. He dug through the mud bricks of the wall without realizing what it was, suggesting there was little of interest at the site. Ernest Sellin and Carl Watzinger excavated Jericho between 1907 and 1909 and found the remains of two walls which they initially suggested supported the biblical account. They later revised this conclusion and dated their finds to the Middle Bronze Age (1950–1550 BCE).[3] The site was again excavated by John Garstang between 1930 and 1936, who again raised the suggestion that remains of the upper wall was that described in the Bible.[4] Kathleen Kenyon resumed extensive excavations between 1952 and 1958 and found no late Bronze Age defensive wall or pottery. Her excavations found a series of seventeen early Bronze Age walls, some of which she thought may have been destroyed by earthquakes. The last of the walls was put together in a hurry, indicating that the settlement had been destroyed by nomadic invaders. Another wall was built by a more sophisticated culture in the Middle Bronze Age with a steep plastered escarpment leading up to mud bricks on top. After this there was a hiatus until later Iron Age material dating to around the seventh century BCE. They did not find substantial evidence for renewed occupation in the Late Bronze Age at the time of Joshua and the biblical story of the Battle of Jericho, which in general agreed with the earlier statement by Watzinger that "in the time of Joshua, Jericho was a heap of ruins, on which stood perhaps a few isolated huts".[5] Perhaps the most important discovery was evidence that the earliest wall dated to around 8000 BCE. Material from level IV, phase III of the site has been radiocarbon dated to 7825 BCE. This time period was thereafter called the Pre-Pottery Neolithic A, a late phase of the Stone Age predating pottery in the Middle East. The wall is considered part of an early proto-city.[4] It surrounded and protected a Neolithic settlement which contained an organized community of between 2,000 and 3,000 people.[6]

The Neolithic wall was complemented by a stone tower built into it. The wall was possibly built in order to prevent floods and the tower used for ceremonial purposes[7] but the dimensions of the wall (approximately 1.5 to 2 metres (4.9 to 6.6 ft)[8] thick and 3.7 to 5.2 metres (12 to 17 ft) high, as well as that of the tower (8.5 metres (28 ft)) suggests a defensive purpose as well. Furthermore, the construction of such a project implies some sort of social organization, division of labour, and classes. Surrounding the wall was a ditch 8.2 metres (27 ft) wide by 2.7 metres (9 ft) deep, cut through solid bedrock with a circumference around the town of as much as 600 metres (2,000 ft).[9] Kathleen Kenyon commented on the work involved in the construction of the ditch: "The labor involved in excavating this ditch out of solid rock must have been tremendous. As we have discovered nothing in the way of heavy flint picks, one can only suppose that it was carried out with stone mauls, perhaps helped by splitting with fire and water."[10]

The town of Jericho, which was about 2.5 hectares (6 acres) in size, preceded the wall by about 500 years. In fact, evidence suggests that construction started prior to the agricultural revolution. The town contained round mud-brick houses, yet no street planning. Despite the existence of the wall and tower, Jericho was still a proto-city, much like Çatalhöyük.

Speculation persists about the purpose of the tower and it may have had several purposes. Archaeologists Ran Barkai and Roy Liran used computers to reconstruct sunsets and recently found that when the Tower of Jericho was built, nearby mountains cast a shadow on it as the sun set on the longest day of the year. The shadow fell exactly on the structure and then spread out to cover the entire village of Jericho.[11]

In an article in the Jerusalem Post, archaeologist Ran Barkai argued that the structure was used to create awe and inspiration to convince people into a harder way of life with the development of agriculture and social hierarchies. He concluded with, "We believe this tower was one of the mechanisms to motivate people to take part in a communal lifestyle."[12]

Other ancient walls from the tell, different from the one discussed here, were built of unbaked mud bricks set in mud mortar on a foundation of stone. The Neolithic bricks were hand-made and in differing shapes for different periods. They can be distinguished from the Bronze Age bricks, which were made in rectangular molds, and were about 2 inches by 14 by 10 (ca. 5 × 35 × 25 cm).[13]

The Book of Joshua deals with Jericho during the Late Bronze Age, at around 1400 BCE, which is some 6,400 years after the neolithic "Wall of Jericho" fell out of use.

In the Book of Joshua, the city of Jericho was the first Canaanite city that the Israelites attacked upon their entry into Canaan. The Israelites destroyed the Bronze Age wall of Jericho by walking around it with the Ark of the Covenant for seven days. They circled the walls once per day for the first six days, then circled the walls seven times on the final day. The Israelites under Joshua's command blew trumpets of rams' horns and shouted to make the walls fall down (Joshua 6:14–15). This account from the Book of Joshua is one event in the larger narrative of the Israelite conquest of the biblical Canaan.